Know Your Customer Like Never Before, Part 5: Diversity in the City

Know Your Customer Like Never Before, Part 5: Diversity in the City

For the fifth installment of our tapestry series, we’ll be covering Tapestry Segments in the City.

(Note: you can read the first, second, third, fourth, and sixth posts or access the whole series here.)

This post (as well as the previous post) specifically highlights Tapestry Segments in LifeModes in America’s urban core. This post includes urban LifeModes predominantly made up of Ethnic Enclaves and Next Wave populations. Households in these Segments are made up of young, mobile, and diverse populations living in the most densely populated neighborhoods of the largest cities. As these populations get older and start families, they begin to move to neighborhoods that flank major cities as well as affluent suburbs. They will also begin to utilize health care more and more. By targeting these LifeModes, a healthcare organization can hone in on areas where the growth of healthcare needs can be expected in the future and plan accordingly. Before we dive into the rest of this post, here’s a quick Tapestry refresher: Tapestry Segmentation was designed specifically for understanding your customer’s lifestyle choices —what they buy and how they spend their free time. This information gives Stratasan, and our clients, insights that help identify a facility’s patient types, optimal sites for hospitals, physician offices, FSERS, and urgent care locations. We use Tapestry Segmentation to help our clients get higher response rates, focus on the most profitable growth opportunities, and invest their resources in the best ways possible.

The Segments in these two LifeModes (Ethnic Enclaves and Next Wave) are comprised of three primary Urbanization Summary Groups:

Now that we understand the urban scope of these two LifeModes, let’s take look at some of their general habits and some of the Tapestry Segments within them:

The Ethnic Enclaves Lifemode is made up of six Tapestry Segments: 7A - Up and Coming Families, 7B - Urban Villages, 7C - American Dreamers, 7D - Barrios Urbanos, 7E - Valley Growers, and 7F - Southwestern Families. Households are generally 27-34 years old, live in single family houses, are primarily Hispanic (both Black and White), have a median HH income between $27,000-$65,000, and do not have a high school degree (Besides 7A which you will see below).

Households in the Ethnic Enclaves LifeMode:

Let’s take a closer look at some of the Tapestry Segments that make up the Ethnic Enclaves LifeMode: This Lifemode is made up of five Tapestry Segments: 13A - International Marketplace, 13B - Las Casas, 13C - NeWest Residents, 13D - Fresh Ambitions, and 13E - High Rise Renters. Next Waves’ households tend to be 27-33 years old, live in rentals consisting of multi-unit housing and high-density apartments, they are entirely Hispanic, have median HH incomes of $22,000-$42,000, and are virtually uneducated even to the high school diploma level.

Those within the Next Wave LifeMode:

Let’s take a closer look at some of the Tapestry Segments within this LifeMode: Throughout this series on Tapestry data, we will break out the various Tapestry Segments by LifeMode and uncover what the population that falls into each segment does, where they live, and what drives them. With a more in-depth understanding of each segment, you will be better equipped to serve your existing patient populations and expand your reach within your markets.

Since Tapestry Segmentation is so diverse and can be quite different depending on what part of the country you are in, we will break out the segments within the many LifeModes over the course of this series. By the end of it, you will be able to identify and interpret the tapestry segments in your market and help coordinate your strategy and/or marketing outreach accordingly. 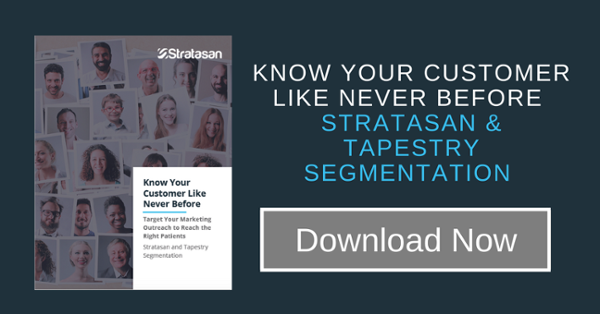 How Stratsan’s Data Process has Adapted to Maintain Data Integrity By ...